Pipes are a type of "spatial" connection which can be formed between portals to model movement of bulk product.

Pipes are a type of "spatial" connection which can be formed between portals. Pipes are different to the other spatial connection objects (Spatial Link and Track Objects) because they do not carry items, but instead carry numeric values between attributes.

They complement track and spatial links for items by providing links for attribute value flow. This flow can represent any bulk solid or liquid material or commodity that is moved around without the need to make detailed distinctions between one unit or “packet” of the material and another.

The pipe connects a Source Object to a Target Object.

These objects can only be portals. 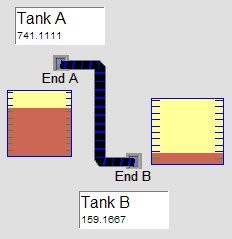 The pipe also connects a Source Attribute to a Target Attribute.

By default the pipe looks for an attribute called pipe in the source and target portals. However you may prefer to make use of table cell references for these values.

The pipe is composed of a number of "logical bins" in series, each bin stores a quantity representing its "level". The number of bins is computed by Total Time / Time Resolution - the finer the time resolution, the more bins. 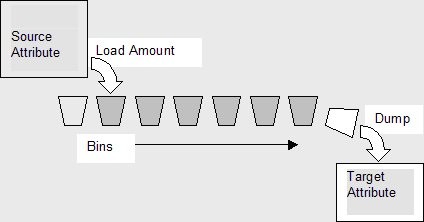 Pipe objects have been successfully used to model bulk ore and commodity flows over conveyors. This is the most common use for them so far in our experience. There are likely to be others.

In dealing with pipes (and in most other cases) you the modeller can only communicate with pipes, and other objects via the parameters they use. A convenient way to "talk" to a pipe is to create a table of operating parameters, then dynamically change its values. This can only be done using routines.

You can use the Run Control attribute of the pipe to simulate random equipment failures. Make this Run Control a variable in the table and you can turn the flow on and off remotely - due to stoppages, or operating policy. If it is set to zero the conveyor (pipe object)'s flow stops. If it is set to 2 the rate doubles, and if 0.5 it halves, and -1 it reverses the flow, so you have a direction/speed variable available to you as well.

Clicking on a pipe in paused mode displays useful information in high precision, including its transfer rate per sample and update interval.

This is how to work a pipe:

If the Run Control is 1 it will work to draw down the Source Attribute value, at the load rate.

If the Source Attribute value goes to zero, you draw nothing, but the pipe is still running.

If you are using the Load Limit option, when it goes to zero, all your order has now been fed into the pipe and you will draw no more - this enables the pipe to “run-out”. It does its own remaindering, so you should get exactly the quantity you ordered.

If you want to adjust the amount loaded you can do so at any time.

If you want to cancel the delivery, set the Load Limit back to zero, and let the material run out.

Setting Run Control to zero stops the flow through the pipe (or “stops the wheels turning" on a conveyor). If the Load Limit is active, it will stop passing material into the conveyor bins at this point because the next bin is not being presented. To re-start the flow, just turn Run Control back on - the pipe/conveyor will continue decrementing the Load Limit quantity (i.e. the outstanding order qty) from where it left off.

Pipes have a new attribute "Output Scale" which scales the outgoing material as it gets dumped into the pipes output.

This enables rescaling of quantities to occur without separate calculation logic.

If the pipe is run in reverse, the scaling is then applied to its input in reverse, hence keeping the total amount of material in the network consistent

The pipe's logical operation and its on-screen representation are quite distinct, hence changing the display properties does not affect the model run results, nor the model run time when advancing without animation.